Pruning roses has the benefit of controlling the size and neatness of the bush while maximising the flower production. 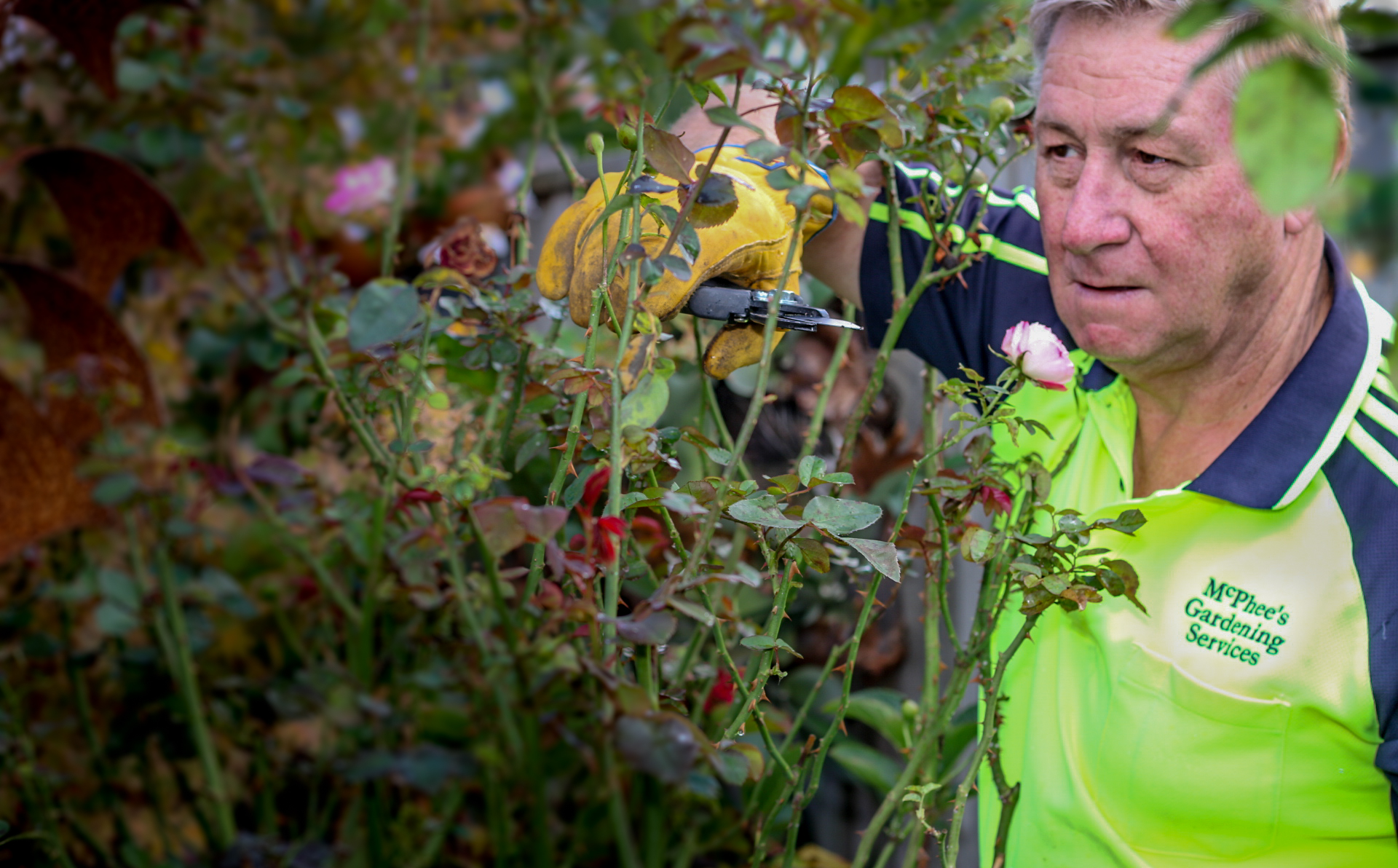 Winter time is cold, wet and staying inside… right, well for us gardeners this is a very busy time of the year in the garden.

Pruning roses has the benefit of controlling the size and neatness of the bush while maximising the flower production.

Pruning is normally undertaken in winter from late June to August for areas that are subject to frost. As we are very busy pruning many roses for customers pruning start from June onwards. During its life span, the rose will produce continuous water shoots (or basal shoots) from the bud union at the base of the plant, forming the beginning of a new stem.

Fresh rose stems claim most of the sap flow, producing long stems with large quality flowers. After a period of time the sap flow will gradually decrease and the stem will become exhausted. You will begin to notice that old stems lose their vigor, producing short twiggy shoots, with smaller, fewer flowers, before eventually dying off.

Therefore the procedure of pruning is to help accelerate this process, aiding the rose to produce higher quality flowers, foliage and stems. This is done by allowing the plant to put all of its energy into the new growth, instead of maintaining old stems.

The way a rose produces these branches is affected by the type of rose bush it is.

When pruning always cut slightly above the growth eye (or growth bud) as this where new growth will begin to appear. Growth eyes occur where there is, or was, a leaf growing from the stem.

All bud grafted roses may have an issue with suckers. These are shoots that come from below the bud union and are produced from the root stock. They can be easily confused with water shoots but will have different growth habits to modern rose varieties, different leaf shape and will be undesirable. It may be necessary to dig into the soil to identify the base of the sucker. Therefore with all types of roses, keep an eye out for suckers and remove immediately.

These require little to no pruning. Remove any old or dead wood. However for a neater look, prune as per bush roses.

For old fashioned roses that only flower in spring, winter pruning will reduce the number of flowers. For these roses, only remove the dead and very old twiggy wood. For best results, prune once the spring flowering is over. A very light trimming to keep the plant neat may be necessary, be sure to keep it light.

Climbing roses are slightly different to bush roses as they produce long caned stems. These form the basis of the climbing structure, supporting the growth that will produce flowers. As with bush roses, these canes will continue to appear, however they do not need to be removed as rapidly as the water shoots on bushes.

Climbing roses need to be trained to produce the desired effect. This is done by weaving or tying new canes, to a support system– which can be a fence, wall, pillar, etc.

Ramblers rarely flower twice on the same stem. For this reason, it may be necessary to cut the stems that have recently flowered back to their base or to the next strong shoot. This is to be done immediately after flowering has finished. Be sure to train the new shoots to replace the stems that have been removed.

Ground covers need little to no pruning. Remove dead heads – these are the spent flowers left on the push – and light trimming to keep them tidy.

Standards are pruned in the same way as bush roses. However, keep in mind that standards produce less water shoots and will not renew their stems as often. Therefore, resist the temptation to shape your standard roses.

All standards need to be staked as they cannot support their own weight, snapping in strong winds. When pruning be sure to replace the ties, this will stop the tie becoming too tight around the stem which can reduce the sap flow, stunting the growth of the rose.

Most weeping standards are ramblers, climbers or ground cover varieties. Keep in mind the rose variety when pruning (especially with ramblers or old fashioned roses) and follow instruction mentioned above. Weepers perform their best when unpruned and therefore they require little to no pruning. Remove dead wood and old twiggy stems after flowering. Dead heading and very light trimming to keep it tidy may also be necessary on some varieties.

If plants have had black spot or mildew - or any other fungal disease - during the growing season, the fungal spores will stay in your garden. Be sure to collect all clippings after pruning and burn them. This will help stop the spread of disease around your garden.

What to do after pruning

After completing pruning during winter it is best to spray roses with lime sulphur. This helps to eliminate fungal spores and eggs from pests, giving you a fresh start come spring. This is especially important for rose gardens that have trouble with black spot and mildew during the growing season.

Follow the instruction on the packaging and spray every stem on each rose, making sure to also spray the surrounding ground.

This spray may defoliate the rose plant if used during the growing season, hence why we suggest spraying only after pruning in winter.

After pruning and spraying during winter, applying a new layer of mulch will be beneficial to your roses. Mulch works as an insulator, protecting from temperature variations helping to retain moisture in the soil, preventing damage to the roots from hot weather and drought conditions. Therefore gardens will require less watering and weeding. Mulching your roses will also help to provide them with necessary nutrients as the matter begins to break down into the soil.

During the flowering season

Roses often do not require pruning during the flowering or growing months. Throughout the season be sure to dead head and remove any die back as it occurs.

Dead heading is the process of removing spent flowers. Old flowers left on the bush will begin to turn into hips and seeds, taking up most of the plants energy. The removal of spent flowers encourages more blooms to grow, maximising flower production. Snap or cut off the flower where the first leaflets are found.

Die back is the blackening of the tip of the rose stem which then travels down toward the graft. The most common cause of die back is a lack of water.

McPhees Gardening Services prunes many roses in Keysborough, Dingely Village and Patterson Lakes from June onwards. Tip pruning is also handled by us through out the year.